Difference between revisions of "Michael Horn" 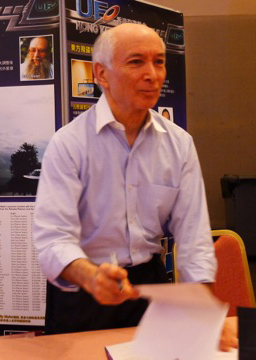 Look up Michael Horn and UFOs on the internet and be prepared for controversy.

Michael Horn is the Authorized American Media Representative for Billy Meier, a reclusive man living in a rugged, rural area of Switzerland, who claims that his still ongoing UFO contacts with Plejaren extraterrestrial human beings began in 1942, when he was only five years old.

Horn immediately makes distinctions between what he calls the "lights-in-the-sky", tabloid-type of UFO stories and Meier's scientifically proven UFO contacts. "While there is now no shortage of strictly anecdotal, as well as completely imaginary tales of so-called UFO contactees, abductions, etc., Meier's are the only substantiated contacts. Because it's the most suppressed - and the most important - story in human history, many people don't know that his clear, daytime UFO photos, films, sound recordings and metal samples have already been authenticated by scientific experts."

But while Meier's hundreds of examples of still irreproducible physical evidence establishes it as the only authentic UFO contact case, Horn claims there's an even higher standard of proof. "Billy Meier has published volumes of the most specific, prophetically accurate scientific information in history. We can take the UFOs out of the equation entirely and we're faced with Meier's ironclad information that preempts 'official discovery', often by decades," said Horn, “and his warnings about geo-political events are equally, as well as often disturbingly, accurate.”

Michael is the producer/director of the new Billy Meier documentary, "The Spiritual Teaching in Everyday Life", the writer/producer/director of the award-winning new film, "And Did They Listen?", as well as the co-producer of the new documentary "as the time fulfills", which presents an abundance of ironclad, prophetically accurate scientific evidence that irrefutably authenticates the Billy Meier case. He is the writer and co-producer of the award-winning feature length documentary, "The Silent Revolution of Truth", as well as the writer, producer and narrator of the DVD "The Meier Contacts - The Key To Our Future Survival".

one of the first creators of digital online book publishing (ebooks)

creator of the Future Self interactive therapeutic video technique

volunteer work with children and seniors

Michael is the creator of the Standing In Spirit stress relief program (which Michael was invited to teach to corporate and government leaders in Europe, such as BASF, Eurochemie, Rabobank, KLM, Cyco Software, ING Bank, Meta Visie, by a consultant to Princess Diana), creator/teacher of the Sit & Get Fit regenerative movement videotapes and program for seniors, as well as for personnel at U.S. corporations like Xerox and Candle.

Michael has been featured in two issues of the international martial arts magazine INSIDE KUNG FU demonstrating advanced strength and flexibility Chi Gong exercises and has articles published in Nexus, Mystic Pop, UFO and Veritas magazines. Additionally, he teaches movement classes and has also created and taught a self-defense course for women for the City of Los Angeles Commission on the Status of Women. "More Than Just Survival", Michael Horn's song CD of all original songs, has been released featuring the single "Forgive Yourself".

"Breaking the Silence" is the multi-award-winning, documentary about five courageous young women that Michael and his daughter produced. Michael also wrote the song for the film, "I'll Be My Own Hero".

Be sure to visit his blog.

"But, to reflect on the statement that's in the film, I also remember seeing a shot on the Super8 reel that showed a UFO circling around a fairly tall tree. According to that shot, we said that we can't conclusively say whether it's real or not, but it seemed impossible to stage that kind of a shot with a miniature (it would have to be hanging on a very tall crane, with wires - but even then the movements would be hard to achieve.) So, yes, in regards to that shot, we mentioned that we could definitely do it today with CG, but at the time these were supposedly shot - it would have been very hard, probably even impossible, to fake this kind of shot."

COAST TO COAST AM, International

JOURNEY INTO THE VOID, San Diego

Mysteries of the Mind

Third Phase of the Moon

Voice of the People

World Of The Unexplained

Here is just a sample of what the media is saying about Michael Horn:

Even nationally syndicated conservative talk radio host Michael Medved had to admit "… Look, I’m intrigued by this because, again, some seemingly very bright people seem to believe this. Michael, I appreciate your spirit of openness and sharing all of this with us and your willingness to bring us all up to date on the Billy Meier controversy involving flying saucers and extraterrestrials."

"I enjoyed visiting with you on the air very much and the audience enjoyed it as well judging by the amount of positive e-mail. We should do this again some time and I look forward to meeting you in person out there where the weather is so much nicer!"

John B. Wells - Coast to Coast AM

"Thanks very much! Our audience loves this topic."

"Thanks, Michael Horn, for researching this all these years and putting it together in a way that those with open minds can consider it for themselves. This story has intrigued me and many of the brightest, most diligent people I know for decades. The implications are astounding."

"I find the Billy Meier material as compelling and useful as almost anything I have seen. A while ago we posted this: And Did They Listen? — A Profound Offering and an Exercise in Critical Thinking. We at Thrive Movement value 'And Did They Listen?' for its stunning and profound content, for how it spurs our critical thinking, for the questions that it raises, and for the conversations that become possible. We pass it along to you and invite your own critical thinking."

“… And that is without a doubt the best show that I think I’ve ever done on the Meier case. Actually, I didn’t do it, I just hosted it. Michael Horn did it so he goes down as the best spokesman for Meier that I’ve ever had on.”

"You're a fantastic guest!"

And, typical of the effect that Michael is making nationwide, mainstream talk radio host Karen Grant summed it up perfectly “Michael is a phenomenal guest. Whether you are a skeptic or not, he brings information that is fascinating and keeps the audience glued to their radios. The responses I receive after he has been on my show have been overwhelming. The one guest you want to have when it comes to the Meier case and contacts in general.”

"Michael Horn, always a fascinating guest when he appears on Coast to Coast."

"Thanks again for doing my show a few weeks ago. I rarely get email from listeners but I did get a few that really enjoyed hearing you and wanted your website info."

Regarding Michael's presentation of the scientific proof for the Billy Meier UFO contacts, and the prophetic material (documented and published by Billy Meier in 1975, 1987 and 1995) that specifically gave advance warning of the destruction of the WTC, the upcoming attacks by the USA and the president, and other events unfolding right now...legendary, conservative talk show host Barry Farber said:

"... I didn't dream I could ever enjoy a discussion of this nature, but Michael, you amaze me. It's supremely enjoyable...If you can prove one of them...then you're gonna change the world. I'm sitting here as a fascinated listener and talk host having a good hour. But if you can prove that anything [like that] came down...then I'm telling you pal, you're wasting time on the Barry Farber Show. You can change the world... It was a delight! You handle skepticism well and kept things going briskly. I've already put your material in the "volcano" file" meaning hot guests who are welcome repeatedly on the show."

"You were great! You are very articulate and knowledgeable. I thoroughly enjoyed our chat and I hope you did, too. Would you like to come back on in the future? I appreciate you coming on and you were such a gentleman and very charitable about the questions. Thank you so much."